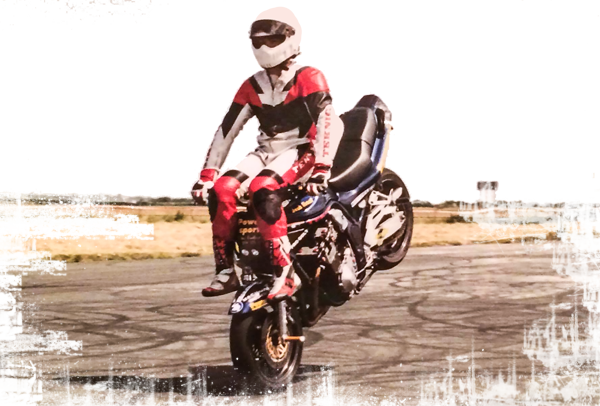 Founded by Jarrod "Jack" Frost in 1995, Holeshot Racing have built thousands of turbocharged bike engines for drag race, top speed, hill climb, sprint, circuit racers and motorcycle engine powered cars, but actually started 10 years prior to it's inception in 1985. We supply turbo and tuning kits world-wide for most popular Sports-bike motors and were first in the UK to turbo the legendary Suzuki Hayabusa.

Holeshot Racing are one of the world's leading motorcycle turbocharging specialists.

In his own words....Jarrod "Jack" Frost

I am 49 now and had motorbikes for over 35 years, but quite late getting into them compared to some people I know. Me and my mates as kids were all into pushbikes and racing BMX but I always wanted a motorbike but my parents were against it. At 14 I persuaded them to let me have a Dirt-bike.

A couple of my mates had 50's at 16 and I wanted one so I sold my Dirt-bike and bought a FS1E. The problem is a small bike makes you just want to go faster, a couple of older mates had 350LC's, RD's, etc. As soon as I was 17 I passed my test, then rode the LC for a bit and there were a dozen or so of us with LC's, then we all started getting into big 4 strokes.

I got a GPZ750, then a GPZ900R as it was the fastest production bike then.  The GSXR1100 came out in 86 and had to have one which is when i got into Drag-racing. It was not long before a gang of us had tuned GSXR's, GSX's, Zed's etc and the game was on!

My next GSXR went out to 1340 with Nitrous and not long after I went turbocharged, it was still on the street and did an 8 sec 1/4 mile. That was it, I became hooked on turbos, the power and torque is amazing so I built a more serious Drag-bike, it was a Suzuki GSX EFE bored out to 1500cc with a big ass turbo prepared for the Super-street class which run road legal tyres and 68 inch wheelbase with any engine based on a production machine. I won the ACU championship and the IHRA championship and it was the fastest turbo only bike in the world.

After this I looked for new challenges and went circuit racing. I started on an RGV250 like many lads back then. I had some good results but had a bad crash leaving me with a  wrecked left shoulder, I had bone grafts and metal work and took a good 18 months before it healed properly. I went back to Drag-racing and having fun on the Street and Turbo bikes. One of my GSXR Turbos progressed into my Spondon Turbo wheelie bike which I broke the World Wheelie Record on in 1997. I was an engineer from leaving school and always built bikes for myself and others, so as a natural course  founded Holeshot Racing, purchased a Dyno and some more equipment then began making a living out of it. I then went back into circuit racing in 1998 through to 2002, racing 250s, 600's and 1000's, it was always a hard balance trying to run a business and race all over the country.

I stopped circuit racing and competed in Supermoto for a couple of years riding for CCM, TM and also my own Hondas while also competing at many Enduro events around this time. We always worked on bike engined cars and I have owned many Hayabusa Turbo Cars as well as the Turbo bikes whilst competing circuit raced cars, including hill-climbing and sprint events.

During all this I always had the Drag-bikes and Top-speed machinery, Turbo'd one of the first Hayabusas in the country in 1999 and in 2001 I broke the UK Land-speed world record at 228mph. We have continued to push this higher and have ran 271mph as of 2017, in 2010 Holeshot Racing has also broken the 600cc speed record on our turbocharged Yamaha R6 reaching 204mph on a standing mile which is faster than a Kawasaki H2, go figure!. In 2016 Our Kawasaki ZX10R Turbos set a world record at 235mph for a Top Speed run, the same bike was also used by one of our team riders Cecil "Bubba" Myers from America during the World Wheelie Records meeting a few weeks previous, setting the fastest ever kilo wheelie on a Kawasaki and putting him firmly as the world's fastest American on one wheel and 4th fastest in the world reaching a staggering 197mph. The bike is also being used in America to compete at the World Wheelie on ICE Records, it is an incredible machine and has set the bar.

Holeshot Racing have tuned endless amounts of Big-bore road engines as this was my main background, also a lot of 600's and 1000's, and supply engines for many racers and race teams. We have had a Dyno for well over 25 years, Holeshot Racing is one of the longest established Dynojet Tuning Centres in the world. Our Dynojet Dyno is 750hp and has capacity for all bikes and cars. Holeshot Racing are also agents for other extremely professional engine management systems such as Motec, Syvecs, Life Racing, MBE, Dynojet and Woolich to name a few of the best in the business.

Turbocharged motorbikes are a personal passion, it is hard for many people to comprehend why you would have a bike so powerful, but why not?. I hold many land speed records and I have had Turbo bikes for 29 years and see it as a progression of Tuning. Many people think they are just bolted on, but we make all the parts, the fabrication, the engine management installations, etc. My own Hayabusa Turbo is the pinnacle of Turbo bikes, it is still 1300cc, and makes 708hp at the rear wheel, I have achieved 271mph on a flying mile, 264mph on a standing mile, 235mph on a standing kilometer and 194 on standing 1/4. I have also achieved a 243mph top speed on a naked bike (without fairings) and a 228mph pull up wheelie (lifting while entering the finish line at terminal velocity).

I am Jarrod "Jack" Frost.....Holeshot Racing is my legacy, this is what I do and I share the highs and lows with everyone that rides my bikes, or uses products provided by us, to allow them to compete at the high levels racing has achieved today in this modern age of electronic assisted racing. I would like to thank everyone we have worked with since the inception of Holeshot and we look forward to seeing you all track-side or at our Tuning Centre.

Ride safe and have fun,

We offer good honest advice and services for engine tuning and remapping.

If you do not look after your motor, service or treat it with the respect it deserves you may damage it and cause costly repairs.